When You Just Know Something 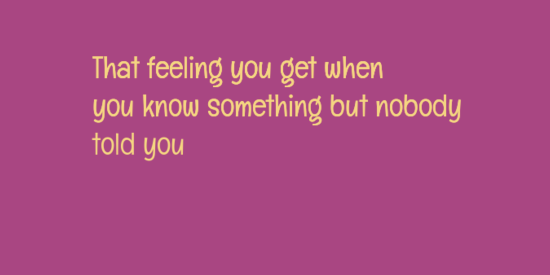 I wasn’t aware as a young child or even as a teen, that I had been bestowed a very special gift.

Lots of people that I have heard about or even have read about, had experiences where they either saw loved ones that had passed over or had very clear messages from Angels. I didn’t have any of that.

I did spend most of the time on my own playing in the garden and do remember that as a child at night I would stand up in my cot and look out onto the landing. The door was open and the light had been left on. Back then and remembering being back there I never felt scared at all. It would only be a few years later in my life where I did become very scared. I was scared of the dark and wouldn’t go upstairs by myself. If I needed the toilet I would make my mother stand at the bottom of the stairs while I rushed up, flung the door open used the bathroom and then pulled the door open again and ran downstairs. I always thought that at night someone or something would get me. I hated going to sleep and would shout for my mum. I started off quietly but it got louder and I was in and out of my parent’s bed.

I wonder what it was that made me so scared? I wanted to find out and in my late forties was given an answer. I won’t talk about that now, but it certainly made sense.

Over the summer holidays when I was 15 years old I would hang out with my friends. Some of my friends lived nearby me and we would see each other most days. Trips to the town, laying around on the park or just going to each other’s houses. I didn’t have a boyfriend, some of my friends did and I wondered what it would be like to have one, but I wasn’t that bothered really, I had my music and played my records, learned all the words and sang and danced. When I wasn’t doing that I was out on my push bike.

Then one day while at home I had a strange feeling in my stomach, I couldn’t really put my finger on it. I wasn’t ill, I didn’t feel sick, I felt that my stomach was trying to tell me something. I saw my friend and I told her about it. I said to her that the only way that I could describe it was that I felt that someone was thinking about me or fancied me. It was a strange thing to say as I hadn’t had a boyfriend so how would I know what it felt like. But this is what it felt like to me so I stuck with it.

Later that day we went to my aunt’s house and my friend came with me. I saw my cousins and we talked and played for a while and then the penny dropped. I was told that one of the boys really liked me and wanted to go out with me and indeed did ask me out. He was one of the boys that I had a soft spot for so I was very pleased, nervous and excited.

This was the very first time that I had experienced this feeling, but it would come again and again and each time it did, something had either happened or was about to happen.