The “Fruits” Of Childhood 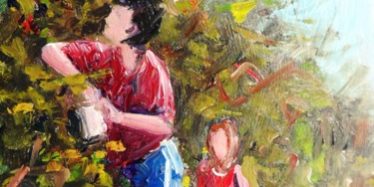 This was an image I saw this morning, whilst walking to take my daughter Rosie to her grandparents house. A mum and her daughter with plastic tubs picking blackberries straight off the bush.

It brought back memories for me as a child being with my own mother when she used to do the same.

We lived in a house that had a back lane that ran at the bottom of our garden. As you opened the little wooden gate you were instantly, what always seemed to me to be in another world. The lane was used for cars so that they could drive up here and park in their garages. Although we did have a car, we used to use this lane to walk down and back on a daily basis.

As you turned left out of the gate and up the back there were a number of garages that were old and run down. Each of them had smashed windows and were not used. But in between each of them were raspberry bushes that were growing. My mother and I used to come here and pick them. We picked some and ate some. Funny fruit raspberries. They had quite an unusual taste to them. They seemed quite dry. You were always careful when eating them as the caterpillars liked them as well and were often crawling all over them.

Further along there were loads of blackberries growing. My mother would pick and pick these. She had this big bowl that she used when cooking and she would take this with her and fill it to the brim.

Although we had fruit trees in our garden we didn’t have any trees that grew cooking apples These were sourced by good old scrumping as it was called when I was a child in the late 1970’s.

After my mother and her friends had finished cleaning they all went with a carrier bag each to get some apples. They were growing in an orchard that was at the back of the old house that Joseph Griggs the first mayor of Loughborough lived in. It had been used as a nursery when I was a baby back in 1968 and then taken over by the Arts Council in the 1970’s. It was here my mother cleaned as well as the school. It was great fun and we all came home with a massive bag full.

On returning home all the fruit would be washed and set aside. My mother would then throw flour on the old yellow table we had in the kitchen and then start making the pastry. She put the apples and blackberries on a old plate and sprinkled some sugar on them and then placed the pastry over the top. It used to fascinate me to watch her as she used a knife to cut the pastry away from around the plate. Then pricked the top with a fork and then in the oven it went.

My mother loved to bake and these pies were delicious. We didn’t really have cream back then, so when the pie had cooled down enough to eat, you had a drop of milk with it that you poured over, or if you were lucky you might just get a bit of cream off the top of the milk.

Late summer and early autumn is a time that always sticks in my mind. As well as making pies there was lots of Jam making in our house. Damson and Gooseberry. We had this little gooseberry bush that grew under the plum and Damson trees. It sat at the back all on its own. Full of spikes and prickles. A strange plant and fruit. I would often eat the gooseberries off the tree, although they looked like they were sour they weren’t. I loved to bite into them and then squeeze all the funny little seeds out of them.

The jam making seemed to take hours. A big metal pan,a large spoon and a saucer is required for the damson jam. As the fruit bubbled away the stones floated to the top and my mother would scoop them up in the spoon and put them on the plate. She used her plate to test the jam was ready as well. Don’t put your finger in this what ever you do. It looked like a volcano erupting and would burn the hand off you. The gooseberries went in green and then the magic happens in the pot and the fruit turns red. Both were then spooned into jam pots and a grease proof paper top put on and then an elastic band over that. Lastly a sticky label placed on the jar and handwritten what was in it.

Both of them tasted really nice. We used to have them with a loaf that you had to slice yourself. Loads of thick butter on the bread and the jam on the top. Sometimes you got a few of the stones from the damson jam that had crept through but not many.

Wonderful childhood memories of summer for me with my mother. Spending time together, having fun and being outdoors. Learning without teaching and moments to cherish forever.