Meeting The Love Of Your Life An Irish Man’s Dream 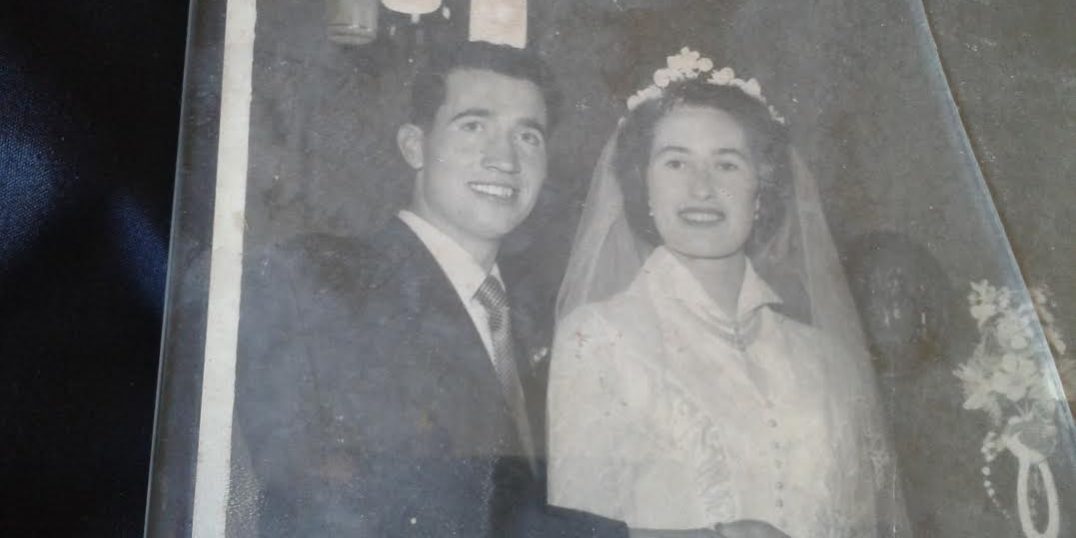 We have all heard about meeting the love of your life and that when you meet them you will know that they are the one. This was true for my Irish parents John and Margaret Cunningham.

None of us know who were are going to meet in our life’s, but sometimes someone comes along that we just can’t let go of. We feel love for them like we have never done before and know instantly that this person is the person we want to spend the rest of our days with.

My mother and father met at the dances in Coventry in the 1950’s. I think it is fair to say that at this time there were lots of Irish men and women leaving their homes to make a new life for themselves in England.

At this time my father was smoking but trying to quit. He told me he used to have a bag of sweets in his pocket to help dull the cravings. When he met my mum she was with her best friend and he used to offer them both a sweet. He met them many times and eventually my parents started courting as it was called in those days.

They got married on the 4th June 1955 and after a short time came to live in Loughborough, Leicestershire, where they had 4 children. Patrick, Thomas, Peter and me Ann, the baby of the family.

The thing I love about the Irish is their sense of humour and their hospitality. Always wanting to look after you and help you, and they would give you the shirt of their back even if it was their last one. Money meant nothing and love everything.

My mum and dad really did love each other and it was clear to see.

In life when we meet people and marry we think it is forever and that we will grow old together. None of us know what is round the corner.

In 1982 my mum was diagnosed with liver cancer and was transferred to Hammersmith Hospital where she had a massive operation. It was touch and go, but she made it through and came home. The following year she even went to Ballycastle in Ireland her home town and visited her family.

Early 1984, she went on a pilgrimage to Lourdes with the sisters from Hammersmith Hospital. My mother was a devout catholic and prayed everyday when in hospital. She was told about the Pilgrimage and went on her travels. Lourdes is a place filled with love, hope and faith. Thousands of people visit every year

My mother was very privileged to meet Cardinal Basil Hume when she was there. A total honor for my mother to meet his Eminence and she even had her photo taken with him.

Then came the terrible news in August 1984 that her cancer had returned and that it was terminal. My mother didn’t want to stay in hospital so she came home. Each of us did what we could to help her. The pain was unbearable, not just the physical pain for her, but the mental pain for us, knowing that we were going to lose her.

I felt for my poor father. This is the woman that he married, the love of his life and now he is going to lose her. It was totally heartbreaking and so unfair. You really question your faith in God when things like this happen. How could you take such a beautiful young woman, who had so much to give and and everything to live for.

My father and myself along with my sister in law where with her when she died, she was 47 years old. She was not alone and had people around her that loved her.

This was the 1980’s there was no counselling in these days, it was stiff upper lip, a week or so off work and then on with life. Harsh it sounds but this is how it was.

Life carries on regardless how you feel and you either fight it or you go with it. My father went with it and got married again to another Irish Lady called Sadie. They are very happy together and have now moved from England and live in Co Wicklow in the South of Ireland.

My brothers all have families of their own, which now includes grandchildren. I have a little girl of my own, I tell her all about her Mama Margaret and her Granddad Goat John, named because he keeps and looks after loads of them.

Even though my mother died and my dad lost his wife, we still believe in love and that through all the bad times will come good times.

None of us know how long we have, so if you are with the one you love look after them and if you have met someone you love very much, then tell them.

Always talk to each other, share your troubles and say a few prayers.