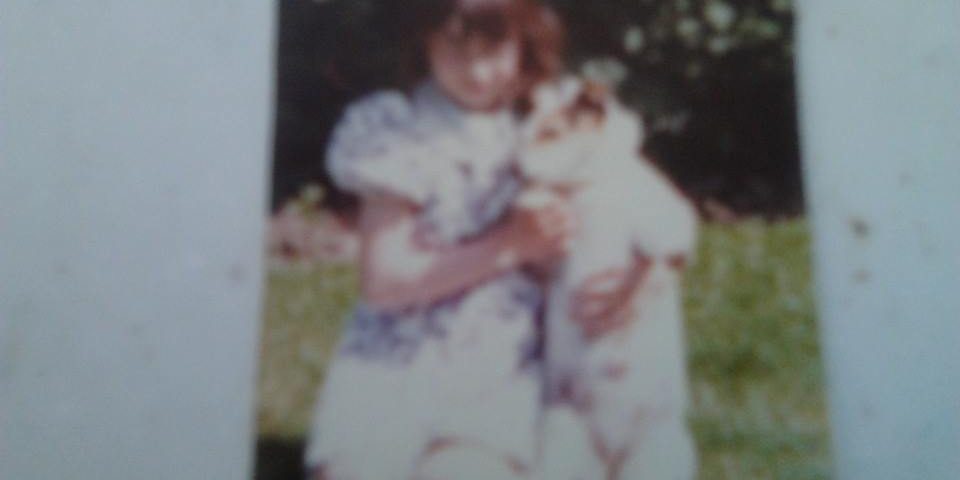 I love this little dog with all of my heart. She had been with the family as a pup when I was a baby. My brother Patrick had brought her home. He used to take her down the meadows to go rabbiting. When he got married and left home he left the dog with us to look after.

When I got older my dad told me that Tess used to nip at my fingers and I would tell her to stop. I think we were both the same age the dog and I. I had older siblings but no younger ones, so Tess was my best friend.

She was a funny little dog and we all loved her very much. As I child I would sit with my mother on the sofa and have a cuddle. My mum would say to me” Watch the dog.” and she would say to me “This is my girl, my baby” and the dog would jump up and want up on the settee as well.

One early morning there was thunder and lightening and I was scared. The dog was scared also and ran up the stairs and jumped on my bed and got under the cover with me. Rosie my daughter asks me about Tess and I have told her this story before.

One day the dog went missing and we couldn’t find her. We thought she may have got out the back gate. I went upstairs and opened my brothers window and started to shout “Tess” really loudly. Our house backed onto a lane, which took you to a field that was opposite the Lougborough University Tower. I thought she may be up there. I could hear a faint bark. I shouted again and another bark I heard. I ran downstairs and told mum and dad. They walked up the back and there she was. She had got trapped in someones back garden and couldn’t get out. She was okay and we were all relieved to have her back.

Whenever you felt ill or poorly she would jump up and lay beside you and keep you company. It’s funny how animals know when your not good isn’t it?

The funniest thing I ever saw was when she went to chase next doors cat down the garden. The cat did belong to my brother Peter as a child, but when we got the dog, Fluffy the cat, went next door and Valerie the polish lady looked after her and eventually kept her.

Getting back to the cat chase. Fluffy was in the garden and another cat down the garden. Tess saw the cats and started barking and running. My mother shouted to leave Fluffy alone, so she did a swerve and ran past her and after the other cat. It was hilarious to see.

She was a brave little dog. Up the road, Jan our neighbor had a big black dog called Kane he was massive, well to me at 8 most things are. On the field the dogs would run around, but now and then they would growl at each other. Kane was much bigger than Tess, but she wasn’t bothered and then they stopped and carried on running again.

We had her for 15 years. 15 years is a good old age for a doggy. She became poorly and my dad had to take her to the vet. It was bad news. I’m afraid poor old Tess was no longer with us. When I came home from school the basket was gone out of the kitchen. I was told what happened and I ran upstairs and sat on Peter my brothers bed crying. My mother came upstairs and sat beside me. She said how sorry she was about Tess. Her words were. “I know it is unfair about the dog and me being poorly as well, but I will ask your dad to get you another dog.” We both had a cry and a cuddle and a few weeks later a little Yorkshire Terrier came to live at out house. I will tell you all about her also in my next blog.