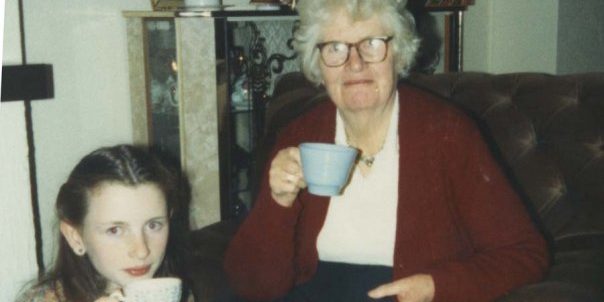 I knew that researching my granny wasn’t going to be easy, but it was something I wanted to do very much.  I knew that she had lost both her mum and dad at a very early age and that details of her parents and relatives were not really known. So on and off for nearly a month I have searched and recorded details of her family and here they are.

Margaret Ann Higgins (Granny) was born on the 2nd August in 1908. She was born in Carrigenagh, Ballykeel Co Down Northern Ireland.

John was born on the 30th August 1873 and he died on the 27th Nov 1912 he was 39 years old. His death certificate stated he had a spinal abscess which he had for three years and he also had septicemia for six months. His wife Margaret Ann was with him when he died.

John was the son of John and Mary Higgins. They married in 1872 at Lower Mourne Church, they had one other son William.

Mary Higgins was born Mary Kinney/ Kenny. Her father was Loughlan Kenny who  was born in 1794. I found a record that stated that he was a trustee of the Kilmoney Estate in Carrigenagh. He had a house here.

Margaret Ann Higgins was born on the 5th April 1872 and she died on the 29th July 1917 she was 45 years old. Her death certificate stated she had plithisis, which is a form of Tuberculosis (TB). When she died her niece Maggie Quinn was present. Maggie Quinn is not a blood relative but her family were goods friends of the Higgins and therefore treated and called her a niece.

Margaret Ann Higgins (Nee Burns) was the daughter of Patrick Burns. He was born in 1833 in Kilkeel. Her mother Margaret Burns was called Hanna before she Married.

When John her dad died my granny was 4 years old and when her mother Margaret died she was 9 years old. Both her parents are buried at St Joseph’s RC Chapel in Ballymartin.

John and Margaret Ann had the following children:

Patrick born 26th September 1901. I found a document it stated Patrick had light brown hair and Hazel eyes. My granny also has hazel eyes and so do I.

in 1901 Mary Higgins age 60 and her two sons William and John, along with her daughter in law Margaret Ann lived at house 10 in Bracknenagh West, Ballykeel.

In 1911 the Higgins family lived at house 5 Carrigenagh, Ballykeel. This was John, Margaret Ann, Patrick, Mary, Elizabeth, John H, Margaret Ann(granny) and Susan. Also living here was Patrick Burns, Margaret Ann’s dad who was a widower. There was nine people living here and the house had just two rooms. The roof was made of either wood or thatch. John was a stone cutter and Margaret a seamstress.

Susan Higgins has applied for Naturalisation on the 21 Feb 1944, she is now called Susan Quinn. Its been confirmed she married a man called Jimmy (James) Quinn.

Married Patrick Joseph Cunningham 29th June 1932 at Newry and Mourne registration District, County Down. She had the following children: Patrick, Thomas, John, Veronica, Oliver, Brendan and Malachy. She did give birth to another daughter, but she died when she was a baby.

Margaret Ann, left Ireland and came to Loughborough, Leicestershire, England to Live in the late 1950’s. She died in February 1993.

As I said before its been a great challenge to find all this information, but I hope that all the family will find it very interesting to read.