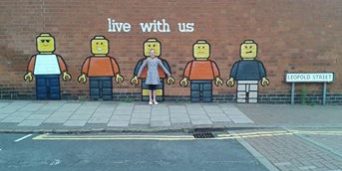 This was never published by my local paper, although I did send it in. Looking at my previous post, you can see a pattern emerging. Its almost as though I am a visionary in some respect and writing about what I see and feel.

The little men have now gone, but my stories and ability to write about them still continue and they live on.

It is a great place to live in the Golden Triangle. I can say that as I lived here when I wrote it and still continue to do so.  I made friends with the artist and the guys at LOC8me who brought the little lego men to life.  Here is my story

Ever felt that sometimes in life certain things are meant to be?

Let me clarify this for you.

A few years ago an unknown artist spray painted some graffiti in the tunnel between Queens Park and the Leisure Centre. It was just before xmas 2012. I wrote about it, the echo photographed it and it was published in the echo.

Fast foward three years and something quite strange has happened. My daughter had the paper clipping out and I re-read it. I Then went to Sainsburys walking up Oxford Street, on the way in, the Loughborough Echo caught my eye as the page had fell open on the story about the graffiti in Southfields Park. On leaving the shop I walked back down Oxford Street and there it was. The lego men graffiti. It was the first time I had seen it.

It wasnt until a few days later I discovered who the artist was. A young boy was carrying his sister as she had hurt her toe. The little girl was crying for her mummy so I walked with him to find his mum at their house. These young boys knew all about the artist. I was intrigued as I write about art and love street art. The little girl was called “Angel” and I noticed a single white feather on their doorstep.  This made me smile.

I have for a long time believed in angels. With all that had happened it seemed to me that there was something very special about this. The words “Live With Us” above the graffiti somehow spoke out to anyone walking past. An invite to live in a community that is rich with history and culture and with people who were young and old and from different parts of the world.

Now we are faced with the possibility that it may have to come down. In my eyes it was never commercial and in fact a big old fat welcome as we say.

So I say please dont take it down.

Ian Thomson “The Twists And Turns Of Being An Artist”
October 4, 2018