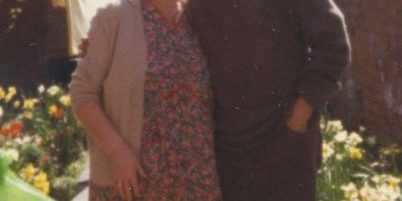 My dad John was born on September 21st, 1935 in Ballykeel, Kilkeel, Co Down, Northern Ireland.

He had a big family. He had 5 brothers and 2 sisters. They are Paddy, Tommy, Oliver, Vera, Mary Bernadette, Brendan and Malachy. My dad was born after Tommy.

My dad left home when he was 17 and went to Scotland to work, he eventually joined his brother Tommy and they worked together for a while, but eventually, they both went to Coventry and this is where he met my mother.

My dad used to go to the dances and he met my mum here. She used to come with her friend. My mum worked as a nursery nurse or a childminder and she looked after a little girl.

At the time that my dad met my mum, he was trying to pack up smoking so he would often have some sweets in his pocket. He used to talk to my mother and her friend and he would offer them a sweet. He went to the dances many times. My mother at the time had met someone else, but after meeting my dad I think its fair to say that it was love at first sight for both of them and eventually, they got together and got married.

Loughborough was to be their home where they raised me and my three brothers.

This is the house that I was born in and raised in. I have so many happy memories of this house and my father included in this. We often talk about our mothers and fathers seem to be in the background, but I am going to share some memories of him that will be with me forever.

Pictured here, my mum and dad, me and our dog Tess.

My dad loved gardening, he had what I can only describe as a magical garden. It was filled with fruit trees, flowers, vegetables and animals. It really was so beautiful.

At the very bottom of the garden, he kept chickens and would often go to Melton Market to sell and buy livestock. We also had a shed. At the side of the shed was a door and inside he had an incubator. I don’t know where it came from but he kept it in here and in it he hatched out lots of baby chickens. Lots of yellow ones and a few black ones, which I thought were the cutest. One day one of the chicks ran down the garden and our dog Tess ran after it and put it in her mouth. I remember the dog being shouted at because we thought she may hurt it, but she didn’t she came straight back and put the chick down at my mother’s feet.

One year a baby duck appeared. He told me to go in the greenhouse and there it was. He worked in a boiler house and next to it was a canal. He had been out and found that there was a nest left and no mother, so my dad took the eggs and put them under a nesting pigeon that was in the boiler house. To his surprise and ours a little duck hatched out and my dad brought it home.

My dad was a bit of a joker at times and I remember he had a big ugly toad in his hand. He had his hands clasped together and asked me to come and have a look. I was very scared and when he showed me I screamed. It was horrible. He just laughed.

Sometimes I would play in the garden and I would, like most kids fall over. I stumped my toes many times and hurt my knees. My dad would sit me on the draining board while he bathed my feet in the sink. At night I would get in his bed with my mother when he went to work. I would feel sick and be sick and he went and got a towel and something to settle my stomach. Nothing ever phased him, regarding health or anything. He was always calm and looked after me.

Music and dancing was a big thing in our house. I would go the Irish dances with my parents and my dad would dance the night away with my mother. The old-time waltz was the dance I remember the most. When we were back home I asked my dad to teach me and he did and the next time we were at the dances I had a dance with my dad.

My mother would like to go to bingo on a Saturday, so my dad would take me to the Catholic Club in Loughborough. They had their own bingo so I and dad played bingo. We also had a cheese and onion cob. You know the ones with the big slice of onion in and then wrapped in cling film. When you opened it the onion was so strong but so lovely to eat.

My dad worked long hours and funny shifts, so most of the time I was with my mother, so I thought it was important for him and me, to share the good times that we had together. After all, this is the man that actually delivered me into the world. It was too late for the midwife so my dad had to deliver me at home. A big surprise for him. He has three boys and thought that I was a boy so had no girls clothes for me. When I came along the next day he went out and bought some clothes for me his daughter.

Christmas was always a very special time. How many children do you know get a letter from Santa. I wanted a girls world, but Santa couldn’t find one so he brought me a vanity case instead. He wrote me a letter to tell me. The best doll I ever had was an Alice in Wonderland doll. She was very tall and about the same size as me. On her back you put discs and she sang a song “Oranges and Lemons” you know the one. She also walked.

As I got older My dad helped me with my driving and even bought me my first car. It was a VW Polo. Arthur prince delivered it to the door and in the back of the car was a bouquet of flowers for me. Such a special and nice thing to do.

Me and my dad, as well as my family, went through a hard time when my mother died. Even though this happened, he has always stayed strong and has encouraged me to do the same. He has always said that we should always look after each other, whether that’s friends or family. He told me that you should try and believe in something in life. Prayer, God or whatever gets you through the dark times. He told me that he believed in angels, that we all have a guardian angel that looks after us when we are born. My beliefs also.

He tells me I am strong and he is very proud of me. I’ve been up and down over the years, but try to be a good person at heart. I don’t see him as much as I would like to, but that’s life as he would say. We all have a life and we sometimes choose to live in different parts of the world. It doesn’t mean we love our family any less, just the way it is.

My dad always wanted to go back to Ireland so after remarrying a lady called Sadie an Irish lady and running a bed and breakfast in Loughborough for many years, they sold up and went to live in Co Wicklow in the South of Ireland. He loves it there. He has many goats that he takes care of and he has a little garden and vegetables and flowers just like when I was growing up.

He turned 80 last year and here he is with his brothers celebrating his birthday. His sister Vera was not at the party but all the brothers went to visit her and spend time with her. She is on the left pictured with my granny Cunningham.

I love and am also very proud of my dad, he has shown me that no matter how hard life is you can be happy again. He always tells me don’t worry about money and let money look after itself. I think its true to say that although he is a man of very few words sometimes what he does say makes sense and stays with you. Love to you Dad, Ann xx