Holidays To Ireland As A Child 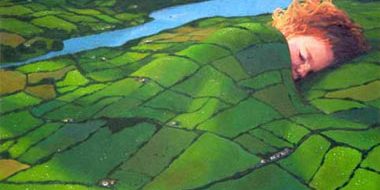 As a little girl I would often go on holiday to where my mum was born. She was born in Ballycastle Co Antrim N Ireland. It was a seaside town and very quaint.

We would go most years to visit my family for our summer holiday. We went by plane from our local airport East Midlands and arrived in Belfast.

I wasn’t much over 7 when we went and I can remember when we landed in Belfast it was a bit frightening for me. There were lots of armed soldiers in the airport. When you left you had to wind your window down and a man asked who you were and where were you going. My uncle was driving and he would say we were over on holiday visiting relatives. The man would say okay and off you went. Then we set off to Ballycastle which was about an hour away.

We stayed with my uncles in a big old cottage up a country road. The house was set up high. My mum and her family lived here when they were little. In this house lived my mums three brothers, Frank, Alec and John. They called Uncle John the count after an old Irish tenor.

The house wasn’t modern in any shape or form. There was no toilet inside. You had to take a trip up the garden to a man made shelter that had a plank of wood with a hole in it and a bucket underneath. This was the toilet.  It was fine by day, but by night it was terrifying. We were in the country and it was pitch black.

We would often go right up the garden and over to the fields. It was beautiful up there and you could see for miles. We watched the hares running around. I remember one day running like an idiot down the hill and couldn’t stop. I eventually  stopped at the bottom with my hands on thorny foliage. I cut myself and my uncle Frank tended to my wound with some Vaseline.

My Uncle Alec was great. He would take myself and my cousin Mary out for day trips. We went to the Giants Causeway with him and it has stuck with me all this time.  He would buy us ice cream and we would sit and watch the world go by in his car near the sea.

Alec smoked a pipe he was always chuffing on it. I didn’t know anyone that smoked a pipe only him and the smell of the tobacco was not that bad really not like a cigarette. His famous words were “boys a boys” don’t ask what it means I don’t know just another irish little phrase.

Uncle Frank used to drive myself, my mum and dad around and take us shopping.  He took us everywhere. He was a hard working man and after a few years he set about changing the house and he transformed it completely. Finally an inside loo.

Sometimes we would go with my mums sister Aunty Mary and Uncle John to John’s family who lived in Dunloy co Antrim. We would visit Archie Johns brother. He had a farm and sadly his wife died and he brought up two young boys.  The smell on the journey was terrible. It smelt like pigs all the way to Archie’s. He had a saying that he used to say and I had forgotten about it until a few years ago when someone said it in my house. It was “You’ve got to be cruel to be kind” I think it refers to hard times and that sometimes you can’t get by and live on love, as love doesn’t put food on the table. Hard work and grafting does. This was farming country.

I have always loved music and it was here in Ireland that I first heard about a great irish singer called “Philomena Begley”. She had sung the classsic blanket on the ground. It was made famous by Billie Jo Spears an american country singer, but I loved Phil’s version the best.

In Ireland where ever you go everyone wants to fill you up with tea and food. There were a few things we couldn’t get back in England, that they only had in Ireland.Soda Scones, which we cut in half and spread loads of butter on. Fadge, which was like a potato cake and vegetable roll, which was like sausage. All washed down with gallons of tea or Brown Lemonade. Yes that’s right Brown.

We spent about two weeks here in total and then made the journey back to the airport and home on the plane. I was always sad going home and didn’t want to leave. As I got older it got harder and my eyes would fill up to the point where I couldn’t talk.

I had a amazing time as a child and remember all the little things about my holidays there with my parents and brother. I loved it here and will always have a little piece of Ballycastle in my heart.