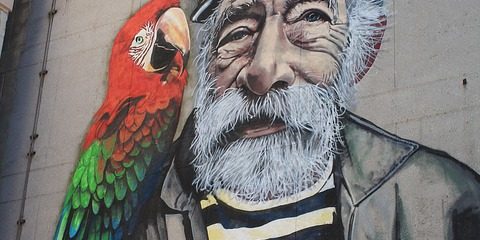 We all need a friend in life and one of my most treasured was:

He was called this because he had a big grey and white beard and had a boat. His boat was kept at the Ring O Bells car park in Loughborough. When he had some spare time he would be doing it up. His carpentry skills came in very handy and he was very talented as a carpenter.

The thing I loved the most about him was his sense of humor, he was a very funny bloke. I came to meet him because I had moved into a shared flat above the paper shop on Nottingham Road and he too rented a room here.

I wasn’t called “Ann” by him but female person. All the women he spoke to were called female person. This was in no way him being rude, but him just having a laugh with us all.

Cooking was something that he liked to do. His specialty was a stew, a one pot concoction of a bit of everything, including my “Not” so favorite garlic. He would go to the “Happy Apple” shop just up the road to buy it and his veg.

We would often have a drink in the pub just over the road “The Jack O Lantern” he helped the landlord out now and again and even made him a new fire surround and other bits and pieces from pallets of wood that were being thrown out by “Richard Roberts” factory that was just over the back.

The two other pubs that he drank in were the Ring O Bells which I mentioned at the beginning and the Station Hotel. He would go on a Sunday and do a pub crawl as it was known back then.

Often we would sit and talk at the kitchen table in the flat. We would talk about life and families.  He was like a father figure to me and a very good friend.

After a while he moved out and moved into the pub over the road. It was a shame and I did miss him, but I did still see him and one  year I had Christmas dinner with him, the landlord and a few other people.

He liked pets and bought himself a little ferret.  It was very cute and ran around the car park. He had his own cage and was very loved by everyone. The ferret went missing and nobody could find it.  Everyone that came in the pub was asked if they had seen a ferret about but nobody had. Then one day, as we were all sat having a drink, this little old man came in with a bag over his shoulder and the bag was moving.  We were a bit alarmed and asked what was in the bag. A ferret the man said. I heard that you had lost yours and found this one.  I say found, I had my bedroom window open. My bedroom backs onto the canal and one night I heard something in the bedroom moving around and making a noise. I thought it was a cat. It jumped on my bed and gave me a fright. I put the light on and there staring at me was a ferret. I screamed and then got a bag and put it in it. I’ve kept it in a cage for a few days, until I could get it up here.

The man then let the ferret out and it went wild jumping and screeching. It scared the crap out of me and other people. I jumped up on a small stool to get away from it.  It was caught and taken outside. It wasn’t the lost ferret after all.  Although we all had a shock it was quite funny and we couldn’t stop laughing after.

Eventually the cute little ferret returned home and was back in his cage.

Captain Birdseye eventually met a lady and had a child with her. He had a daughter. I would often see them shopping in town and we would stop and have a chat for a few minutes

His health had started to Deteriorate . He had problems with his heart and had a few operations in the past,  Bypass surgery was something he had, had.  He was due to have another operation and sadly passed away. So very sad

This is for you Mick, at least now its not 10:30 closing on your birthday anymore. Mick’s birthday would often fall on “Good Friday” and he would say “What’s good about that, the pubs close at 10:30.